Shadowcasting is a way to implement field of vision. A destination square is considered visible from a source square if no obtrusions block the line of sight path to the destination.

Typical field of vision approaches given a radius, to trace all lines from the source to the perimeter checking obstructions along the way. If blocked, all squares beyond the blocked obstacle are ignored.

Shadowcasting is implemented in a totally unique way, calculating scans across rows or columns. It seeks to improve performance over line of sight checks and duplicate tile inspections. 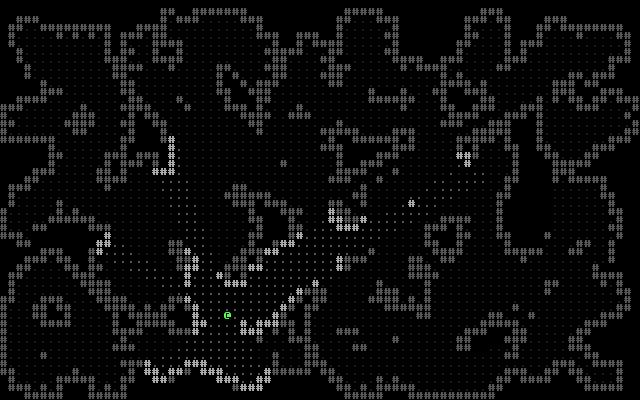 Shadowcasting divides the FOV calculations into eight octants and visits the mapcells in a totally different way than normal raycasting, described above. Instead of tracing lines from the center out to the edges, shadowcasting visits mapcells row by row or column by column, starting with the nearest row or column and working it's way outward.

Here is an order of scanning:

When a scan comes across a cell that blocks LOS it calculates which other cells in rows/columns farther away that isn't visible because of the blocker. Those cells are "in shadow", hence the term shadowcasting.

In order to understand how it works we must understand what the slope and inverse slope of a line means.

The scan is done across 8 octants, each sharing the edge of its neighbors like so:

An octant is scanned as described above, starting with the cells closest to the starting point.

In octant 1 and 6 the scans are performed row by row, going from the leftmost cell to the rightmost cell in each row.

In octant 2 and 5 the scans are performed row by row, going from the rightmost cell to the leftmost cell in each row.

In octant 3 and 8 the scans are performed column by column, going from the topmost cell to the bottom most cell in each column.

In octant 4 and 7 the scans are performed column by column, going from the bottom most cell to the topmost cell in each column.

When a blocking cell is found a new scan is recursivly started one row/column further away.

Example area we want to calculate:

Rows 1 through 11 are all scanned without any problems from left to right. When the rightmost cell is reached a new scan is started one row further away.

At row 12, recursion begins once we hit our first blocked cell:

Since we want to start a recursive scan to ignore all cells beyond the blocked cell as out of line of sight, we can calculate the slope to our starting point since it is not 1 from this position.

Scan 1 will continue along its original row, skipping any successively connected blocked obstacles. Scan 2 will use the original slope of -1 as its left edge and the slope calculated as its right boundary -.75, i.e. does not include it in the scan.

Scan 1 skips the successively blocking cells until it finds its next open cell.

Scan 1 spawns a second recurisive scan, Scan 3 like it did with Scan 2 to calculate the vision beyond. It uses its parent left slope -1 as its left edge and a new slope calculated for its right boundary.

Scan 1 continues to the left until it finds another non-blocking cell. When it is located we calculate our new edge slope and continue.

At this point Scan 1, and child Scans 2 and 3 are running.

The newly located blocked cell in Scan 1 spawns a new Scan 4 and it processes Scan 1's vision beyond that point.

When the scans are done we get this field of view:

The C++ implementation below had the side effect of testing tiles multiple times. This meant that if you wanted to inspect each lit tile one time, it would cause issues testing the same tiles more than once. Think of implementing a lighting engine of of this. Each light casts luminosity onto tiles in an additive way. If we add luminosity for one cast across the same tile more than once we get incorretly brightened patterns.

My C++ implementation around this was to have a static ID that would incremement only when the alogirthm ran. You could check your tile's shadowcasted id and if was different then apply your changes to that tile and reset it. This was obviously a hack and eventually broke down when I needed to run nested shadowcasting, i.e. when one shadowcast triggered another, the ID would increment.

My real solution was reimplemented in C which abandons the shadowcaster id and instead creates a shadowcast test array in memory. Values are only ever calculated if their position in the array has not been tested before.

The original C++ implementation is further down for posterity.

This function takes a game character and checks all other tiles in the vision of the character. The shadowcaster takes its two main functions: determining if a tile is block and what to do when something is visible.

In this example implementation a game character computes its field of view to see all visible tiles within a certain range: