In our wild wild game design world every designer is likely to have their own shade of design methodology, lack thereof being a kind of methodology of its own. I’d like to share a bit of mine.

When I was still a game design student in Vancouver, I was taught this life-changing design tool by Wil Mozell - I don’t mean to name drop, I just owe a lot to this guy – over lunch at a White Spot. At least one mind was blown in that generic family-style restaurant that day. I’ve been whipping this tool out to evaluate every bit of game design I do ever since. Trust me, it’s amazing. The tool is a deceptively simple diagram that I call the ‘Core Diagram’.

In this model, the core mechanic is at the very center and forms a nucleus for your game. The other mechanics form layers around the core, with the narrative forming the very outer layer.

Theory-crafting game designers love to define words, as do I, so let’s not skip that bit! By mechanic I mean a system that facilitates interaction, and by interaction I mean a kind of conversation between the player and the game. Neither of these words actually amount to what games actually are, because a game is the experience generated by those words when they get put in a disco with the player’s brain and circumstance. However, until we invent neuro-technology that can transfer experiences directly from one brain to another, what us game designers can control within this dance are the mechanics. The mechanics are the paint and paintbrush, the nail and hammer, the two girls and cup of our art!

But still, it’s probably not very clear what exactly is a ‘Core’ mechanic in a game. Easiest way to understand it, I think, is in relation to time.

Now that you understand the model, could you guess which games each of these core diagrams represent? 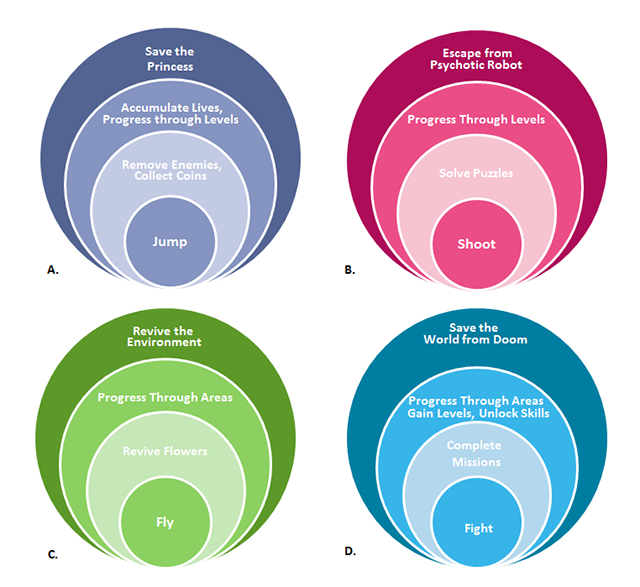 There are some qualitative observations that can be made immediately, just from looking at these examples.

Also consider how Portal differs from shooter games that have puzzles on the side (puzzles that do not use the shooting mechanic in order to solve them), and how effective those experiences are in comparison.

In the last year or so I started looking at social and mobile games in this light, and again, it’s really fascinating to see how they map.

I haven’t tackled how social/multiplayer fits into all this, that would be a post of its own. But a good measure to go by is, a truly social game would require more than one player involved at each of the layers. If I were to make a Zynga game more social, for example, I would make collecting an activity done with friends (this is already the case), buying buildings would be in relation to friends (for example, if I buy the Fashion Design Studio building and you buy the Clothing Boutique building, I could supply you with clothes for your building and we could split profits, right?) etc. Is it any wonder MMO games like WoW are so powerful? They take the classic RPG formula and apply social dynamics every step of the way.

Strategy Games a.k.a. The Slow Core

The core mechanics I’ve looked at in other games so far have a physical ‘fun’ to it on its own. A good designer working on a platformer would pay a lot of attention to the physics of a single jump so that the core activity feels good even without the secondary mechanics or progression. Yet, it would be a mistake to think that every core mechanic needs to have such a twitchy tight singular loop. Looking at strategic games, for example, the core mechanic is often ‘unit placement’. Physically speaking, there’s nothing innately joyful about placing a unit in a strategy game, but look at it as a cerebral activity and it sheds light on how deep and meaningful this core mechanic can be and why strategy games are so much fun. Note also that with strategy games, the core mechanic is far more complex and involves lots of different feedback loops within it. In other words, there’s a lot more information being processed within the interaction right in the core!

I would also add a caveat here and say that not all games fit this mould so well, and those are some of the most fun. Many successful games do modal shifts where you go from one core diagram to another. This works really well, I think, if one set of mechanics is more twitch and the other more relaxed, and the modal shift is used for pacing. A great example of this is one of my favourite game franchises of all time, Mass Effect!

I hope this tool is as inspiring for you as it has been for me, at the very least I hope you find the musings interesting. Try mapping some of your favourite games and see what the diagram can teach you through them. Are there any games that really don’t map at all? Let me know!