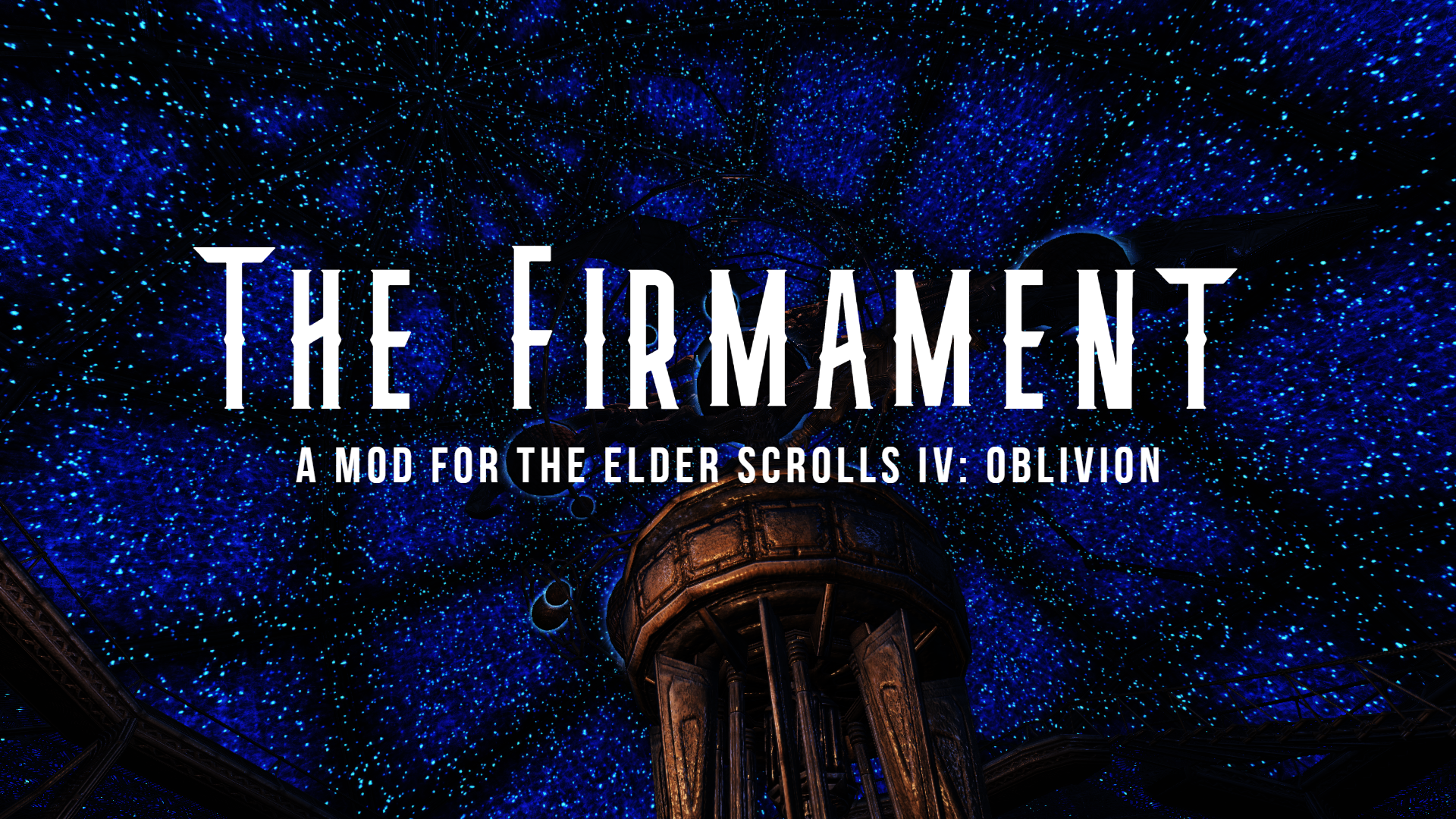 This is Part 2 of this guide on modding Oblivion. In part 1 we stumbled through alot of the scripting and even mechanics of the engine to make functional mod, but I wanted it to be more in tune with the Oblivion experience. The pop ups worked, the powers worked, the note basically told you what to do, but if I wanted to embed this in the Lore of the game I felt that it needed a more guided experience that could enrapture the player character like other lore elements of the game.

Insert Questing into the mod!

Questing added the much needed polish to this experience and also shed a lot of light on the engine mechanics regarding questing and data. Some things I wanted the player to experience:

So we had already added a script attached to an onrunning quest that used an internal state variable to check and progress the mechanics. But now we needed to begin to incorporate quest stages if we wanted the journal to reflect our needs. 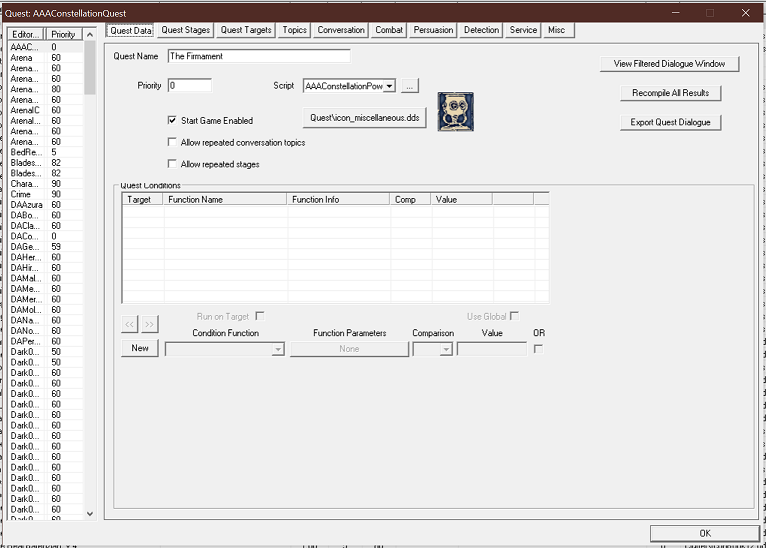 I started perusing other quests and the main online guide on how to get started and roughed out the following:

Armed with this new information I set out to refactor the quest to include Quest Stages and wound up with this setup:

These were the sages with their indexes I settled on and I will explain them in more detail below: 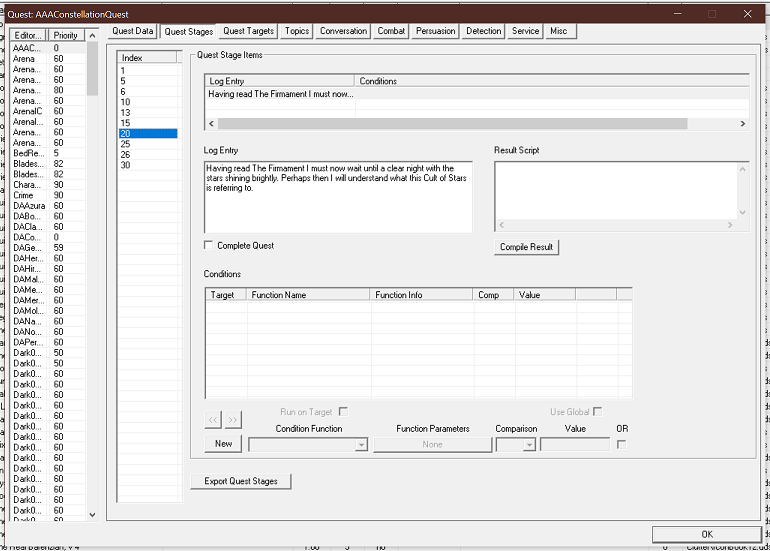 Initialization and The Note

Stage 0 runs its own small state machine requiring the player to be at least level 5 before the quest can begin. Additionally we wait a day after they level up so we do not bombard them at one time on immediately reaching level 5. Once they do we drop the note into their inventory and move to Stage 1. 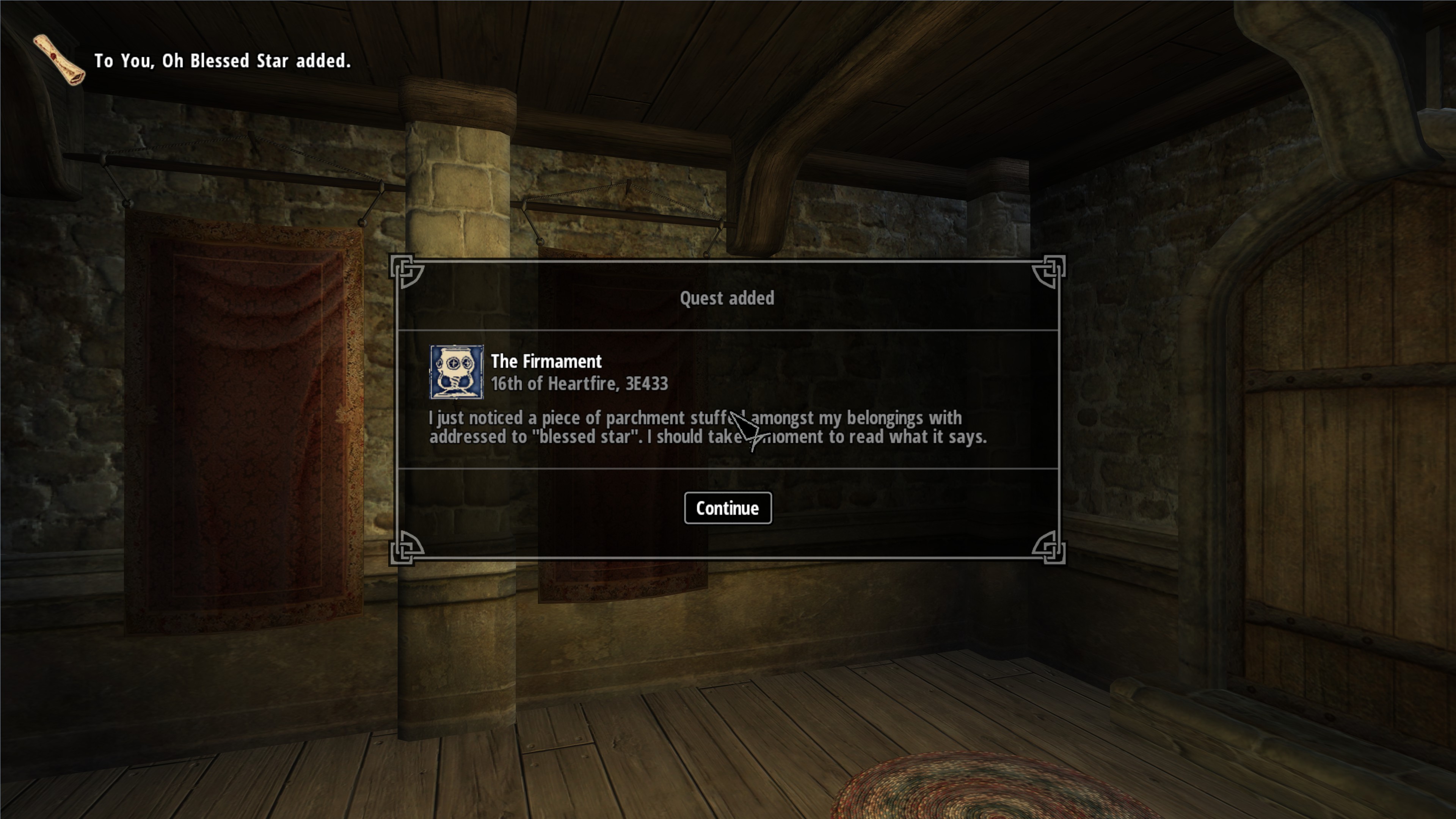 In Stage 1 the quest automatically notifies the player about the note and then stays in this state until the note is read. This is where we needed to add a script to the Note object in our game: 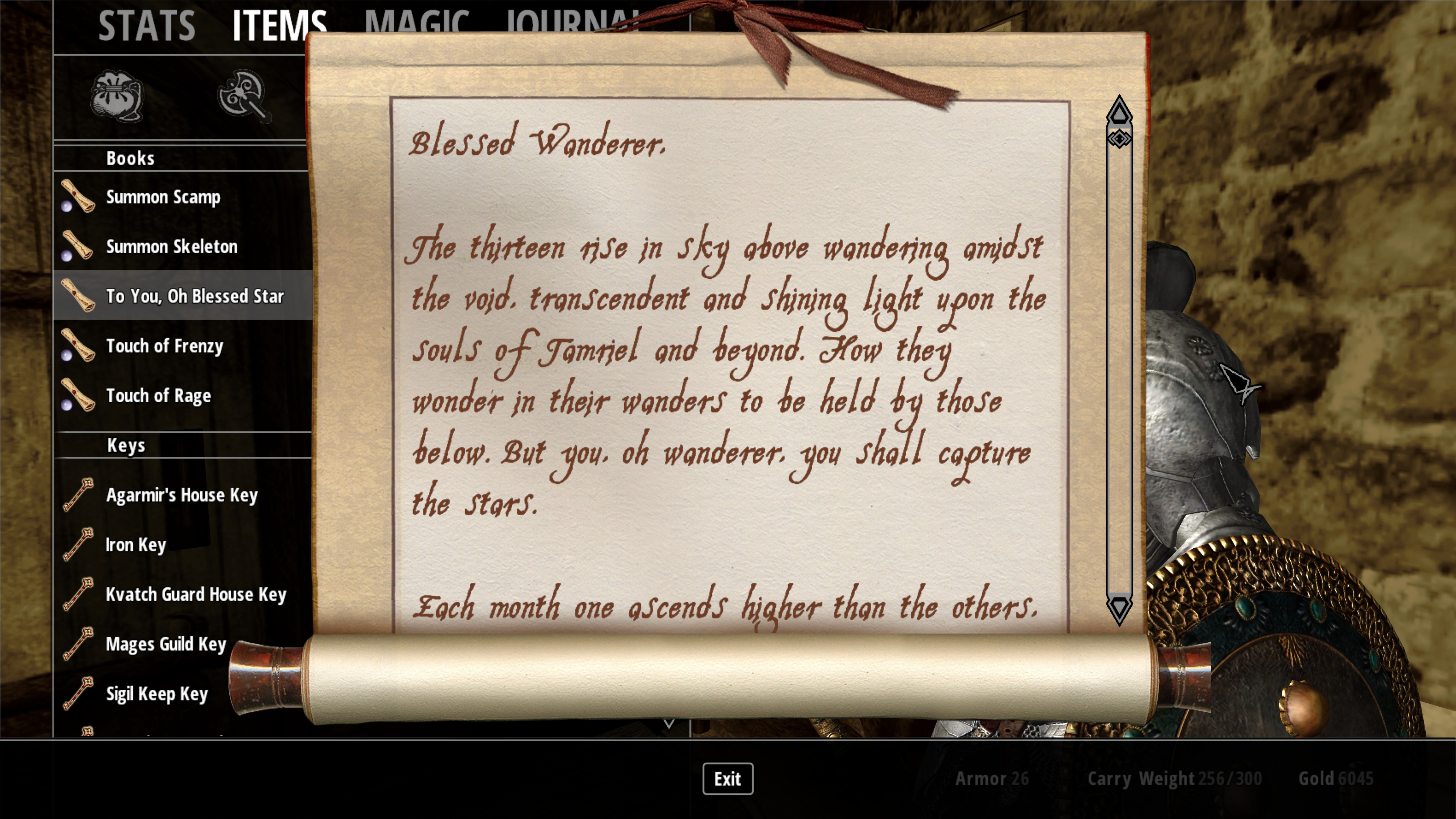 This script runs whenever the book object is equipped by the player, which means when they read it from their inventory. When they do read it we check to see if they have a copy of The Firmament on them and then conditionally go to Stage 5 or 6.

When we look at Stage 5 and 6 we can see they are empty log entries and then in our main script they just transition to a following state. Why not just immediately jump to those stages when they read the book?

Well what I realized is that when we open the book it will immediately trigger the quest stage and show the quest popup which breaks the immersion, you don't have to read it. If I added the event to the unequip game mode then it would solve this but we would still have the quest popup occur while in the inventory menu. It felt more natural for the quest popups to be in the main game play mode and not in the menu modes so by creating intermediate transitions we can wait until they return to the game world to set the next stage, and thats what we do. Notice here that we listen for two modes: OnAdd and OnEquip. When the book is added to the players inventory we trigger Stage 13 which prompts the player to read the copy they just acquired. Additionally this is the same stage that we get sent to from the Note if they already had the book. From our original note it would send them to Stage 6 which then jumps to the same Stage 13 prompting them to read the copy they already had. 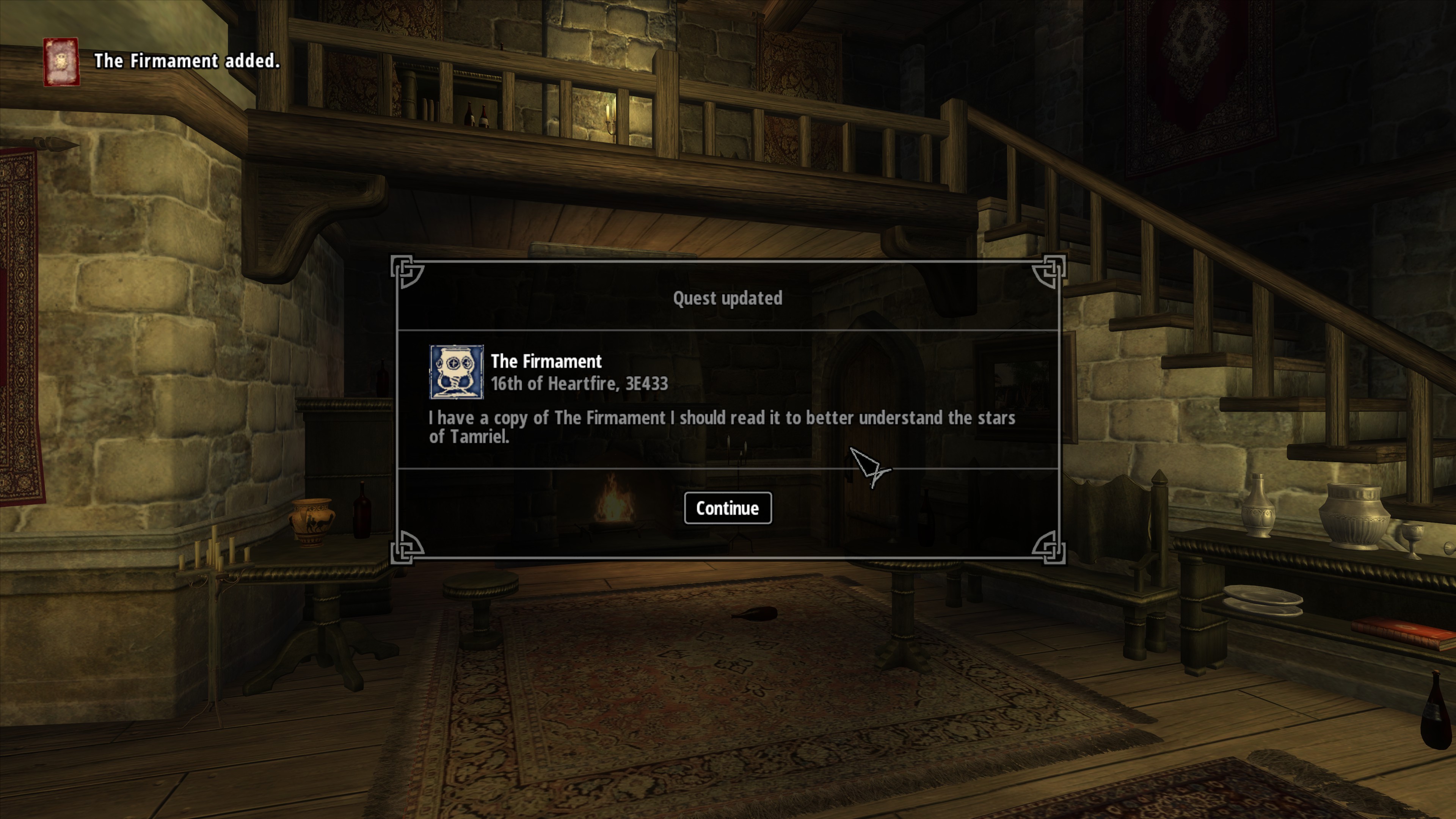 Our OnEquip event listener works similarly to our original Note in that once they read it we go to Stage 15 which is a gameplay transition stage. Once they have read and left the inventory menu we can trigger a change to Stage 20. 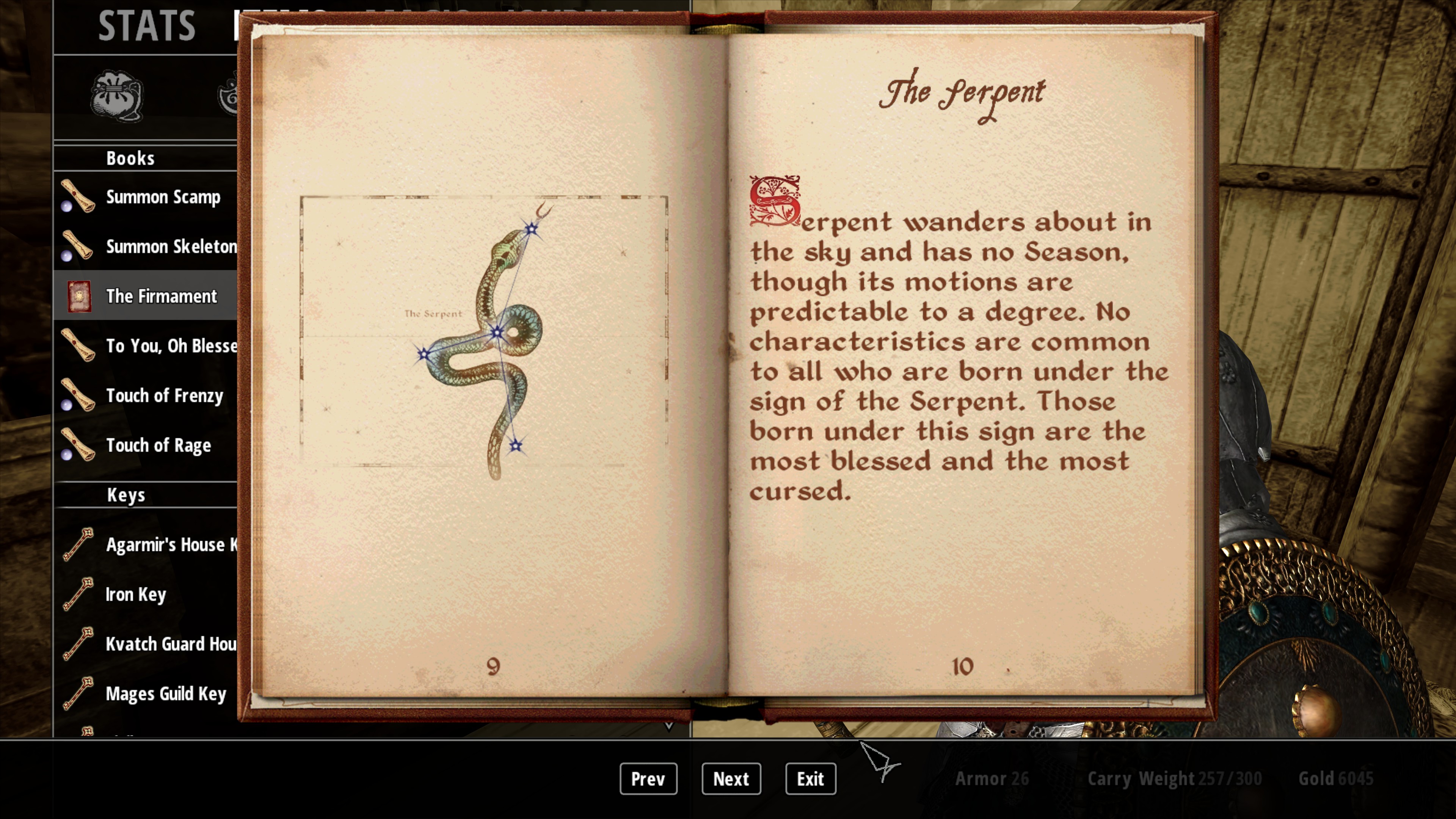 In our previous version of the mod we needed the player to carry The Firmament and then be at night outside with a clear sky before they could look up and be blessed. But this was a little unguided. Also, now with our quest plotline having already incorporated The Firmament for the player it was unnecessary to force them to carry it around. They would likely sell it or something and lock off the quest powers for the remainder of the game and that would not be fun. So at Stage 20 we prompt the player to wait until conditions described are met: that it is a clear night outside. Once we detect these environment changes we transition to Stage 25 where we notify the player their patience has been awarded and now they should look to the sky.

I was play testing this on my main character and this part of the quest triggered when I was fighting in the Arena of the Imperial City. The quest told me to look up and so I did and I was blessed with the powers of the Steed and was immediately boosted in combat for the fight. It was a good experience. Technically Stage 25 and 30 are running the same block of our main script. It is detecting conditions are good and they look up and then proceed with the monthly blessing. But Stage 25 has a few additional conditions:

Stage 26 existed because if we triggered our quest complete when they were blessed we would receive a double pop up, one from our MessageBox for the blessing and one for the final quest stage log entry. So 26 let us complete the MessageBox blessing before moving on.

Once we finally transition to Stage 30 we provide our final Quest Complete log entry. This does not actually stop our quest script as we are supposed to do that with code. But for us, we do not want to stop the quest, we want it to run in the background providing our continual blessings. 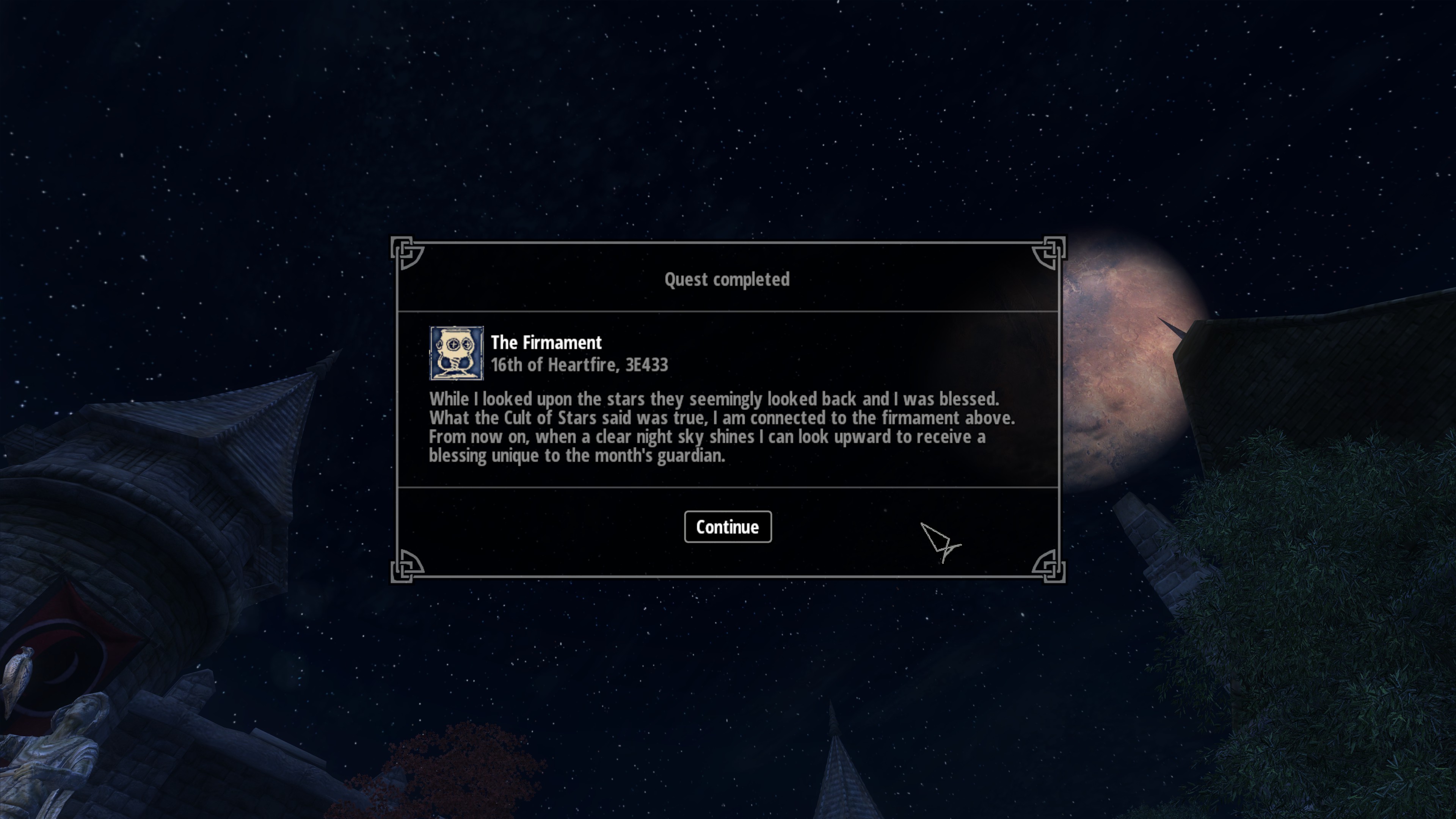 Thankfully the engine allows this, the player gets the satisfaction of a newly completed quest while our script can continue to run in perpetuity to bless them. At this point I felt the mod was complete. I would play test a bit more but then add it to Nexus for others to enjoy.