Lets take a deep dive into the structure, anatomy and loading of a DOOM WAD file and its lump data.

DOOM levels are commonly known as WAD files. In fact a single WAD file contains all of the levels and data for an entire classic DOOM or DOOM II campaign, linked together in the form of episodes. The DOOM engine and the WAD file format was licensed by other studios like Ravensoft for games like Hexen and Strife. 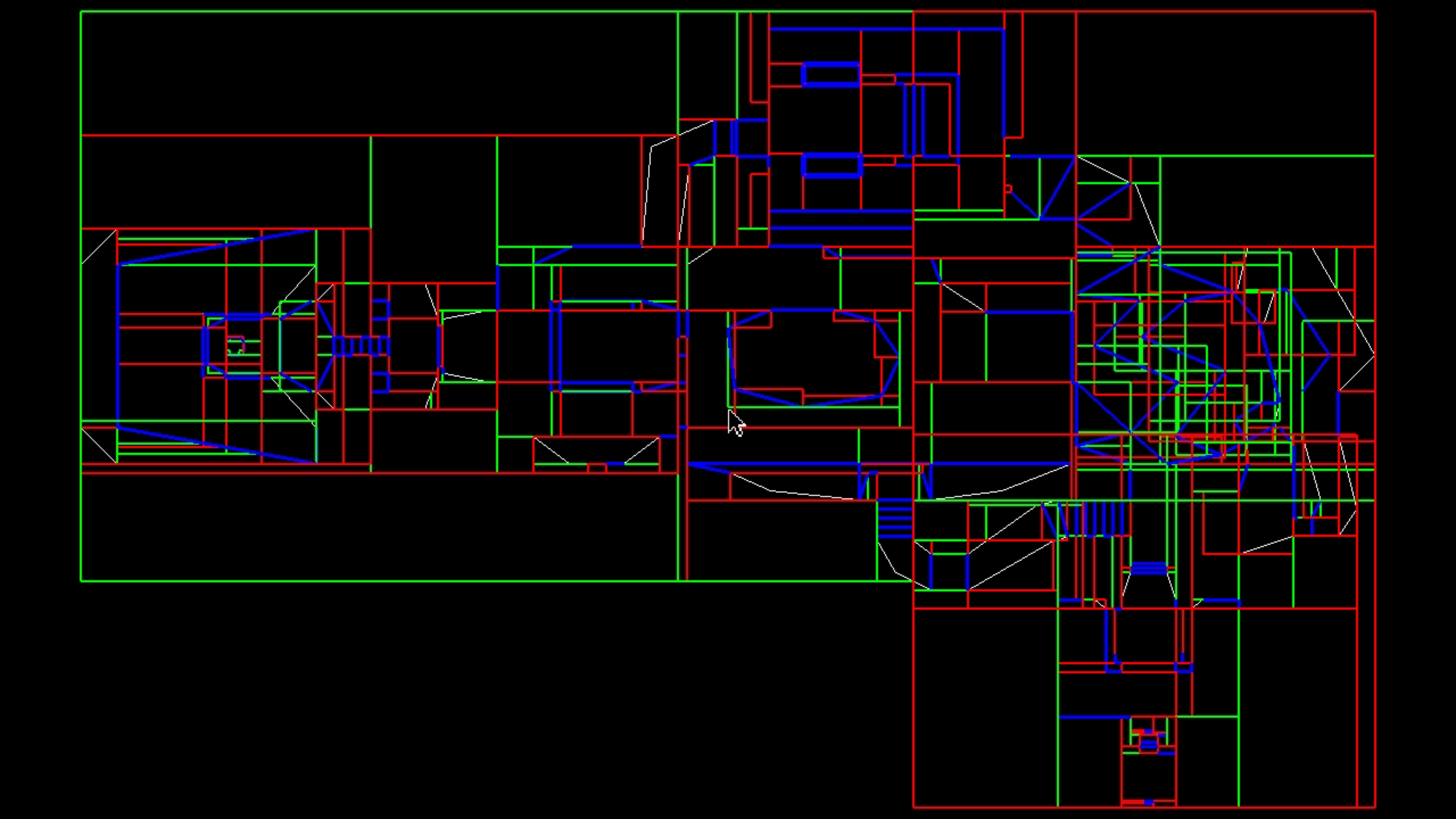 WAD stands for "where's the data?", as it was coined by the DOOM creators back in the early 90s. But I won't be spending too much doing a history on DOOM so much, as that exists in better substance elsewhere. This is a focus on DOOM level building and two major parts:

The best efforts I have found understanding the format of a WAD file are not so much the WIKI and documentation found online, but instead some of the original documentation from that era and the source code of the DOOM engine itself.

I found the efforts of this project DIY Doom and it's reverse engineering of the DOOM engine to shed light on the WAD structure. For a deep dive I suggest you go there. It was the basis for my own recreation of the DOOM engine in Python as a pet project. I will reference this as "DIY".

Additionally The Unofficial DOOM Specs file authored by Matthew S. Fell in 1994 provides the most comprehensive detail I can find, written in a classic text document, regarding the structure of a WAD file. I will reference this as "UDS".

There are two main types of WAD files: an IWAD and a PWAD. IWAD stands for "internal WAD" and contains all of the main game data. A PWAD stands for "patch WAD" and can contain data that overwrites the IWAD content, much like a mod or patch. Somewhat confusingly both WAD files are traditionally ended in the .WAD extension, such as DOOM.WAD as an IWAD and HEXADEATHIMAL.WAD as a PWAD.

For the second part of this page we will be creating a PWAD level which will be overwriting the MAP01 level of the main IWAD file of DOOM II.

A WAD file is divided up into "lumps", each containing contiguous information about the game or level part. The primary IWAD has the following lumps:

Our custom level we will be building mostly concerns itself with the ExMy and MAPxy sections since we will be creating a level that overwrites MAP01 of DOOM II and not overwriting other portions of the game such as music, sprites or menus.

Each level consists of the map directory entry (such as E1M1) and 10 lumps itself:

A level PWAD can contain any amount of data to overwrite in the original IWAD, it does not have to be complete. We could write a PWAD for E1M1 on DOOM with just new THINGS data.

The above diagram shows the general layout of a WAD file with its byte offsets and contents.

The Directory allows us to navigate within the WAD file to any directory we care to load. These are lumps such as THINGS, VERTEXES etc. Each directory entry in the header defines:

Considering that a Map is just a sub section of a WAD file it makes more sense to define an Object representing a DOOM Map and its structures through a class. This class will have all of the corresponding lumps within it defined, along with metrics around their binary sizes, positions and data types. It also can contain the logic for linking data together such as vertices to their parent linedefs and functionality for traversing the BSP Tree.

The BSP Tree that is generated from the Binary Space Partition algorithm is done prior to the WADs creation and the data is stored in the WAD file as a set of tree Nodes. This data structure is very important for the rendering of DOOM walls in the game and calculating wall positions in relation to the player position. I will not be doing a deep dive on the BSP tree but it can be found in the algorithm section on Binary Space Partitioning.

The Map class contains all of the data of a Map lump that is loaded. It defines the static layout of the lumps within it and has lists of all data that will be loaded. Additional functions around linking data and navigating the BSP tree will be appended later.

As you can see the Indices are listed in the same order as the lumps defined in our UDS guide.

If a Map is a class that represents a WAD's map lump, we should also define a WAD class that has the capability of loading a WAD file and populating our Map object data. This Wad class:

The constructor loads the wad file from disk then loads the two main definitions from its start: the Header and the Directory listing.

Loading the header itself is relatively simple if we follow the conventions defined for sizes and it provides data about our directory portion of our header.

The Directory loading operation organizes a list of Directory objects containing the lump position, name and offset of all of the data of our WAD file. We then keep a handy hashmap of the lump name and its position in our directory list for lookup.

Continuing on with our WAD class we need to be able to load a map into our Map class and all of its subsquent parts. We can do so with these new Wad class methods:

Once we have found our directory we can then specifically load map data into the map object off its sub-lumps for THINGS, LINEDEFS etc. This data loading is facilitated by readMapDataList which is defined as:

This method takes the Map's offset in the WAD plus the map's lump data offset to seek to the position of the WAD to load data from. It also takes a byteSize which is the size of each object in the lump, and a function pointer called reader which knows how to load the binary data into a Map object such as a thing. It also takes a list to append this data to.

We will be looking closer at this next with loading our THINGS object.

A THING is comprised of the following attributes:

These 5 attributes are each 16 bit integers and thus each THING is actually 10 bytes. Recall that our Directory records include both the lump position and byte size, so we can calculate the number of THINGS within the lump with: directory thing lump byte size / thing byte size

The important parts of this class are the properties and the byte sizeof. THINGS are special in that they also have flag and type data and I have deleted a substantially large list of type integers.

In here we are specifying bothe the map offset and THINGS offset within it, then the size of bytes for a single THING and a reader function for how to load this data from the WAD, and finally the map's things list to append into. Let's take a look at our reader function for THING data:

In a relatively simple fashion we load the THING data into a Thing object based on the data layout of its properties. The load_* methods were actually a little tricky to define in Python and its been some time since I wrote them so I am a bit rusty on how they are working but they are as follows for reference:

This makes use of the struct package in Python to load binary data from our file pointer. The storage format for a WAD file was big endian.

Combining all of these methods together we are able to:

Loading all of the remaining data is exactly the same. We define a class for each one with its properties and overall byte size and load each item into the map's corresponding list.

At this point we have successfully loaded a WAD Map into our program.

Rendering a DOOM level is an involved process that I will not go into detail about in this section. But I do feel it is important to go over some basics regarding how WAD data is used to render the DOOM world for the player.

First we must understand that the DOOM engine was quite novel in its design and allowed them to bend the DOS system limitations of old computers to render an actual 3D game. It has been argued that DOOM is not a 3D game but instead a 2D game because as we have seen the level structure of a DOOM game is indeed mostly defined as a 2D system of coordinates. This carries over into much of the game play in regards to positioning, shooting and collisions. However we cannot disclude the other 3D elements of the level data as well. Things such as floor height and ceiling height within a SECTOR clearly are used to represent 3D elements in the game world. You do navigate in a z coordinate in regards to your perceived height within the game map. Enemies, objects and terrain has a realistic 3D coordinate in regards to perception and the Camera code of the game also uses quite optimized 3D rendering perspectives to make the game come to life.

So we have an engine that is constrained by both 2D and 3D elements giving rise to the name 2.5 Engine. Personally, I feel like it truly is a 3D engine as that is how it is perceived and felt overall. The 2D constraints are just that, constraints on the 3D world regarding level editing and interaction. But if the mind perceives 3 dimention graphics then I believe it has succeeded at being a 3D engine. Becoming too literal about its definition is arbitrary because any game realized on a 2D monitor screen could be argued that it is 2D dimensional because of its constraints. Even VR could fall victim to this argument since it is more or less a 2D screens before your eyes tricking your mind into a more immersive 3D experience.

Regardless, lets understand some core elements of rendering a DOOM world from our WAD data.

Parts of the WAD file are loaded into memory up front as a level is loaded while other parts are referenced dynamically within the game world interaction to determine rendering position of objects in relation to the player.

Take a look at the Binary Space Partitioning for details on how that portion works. 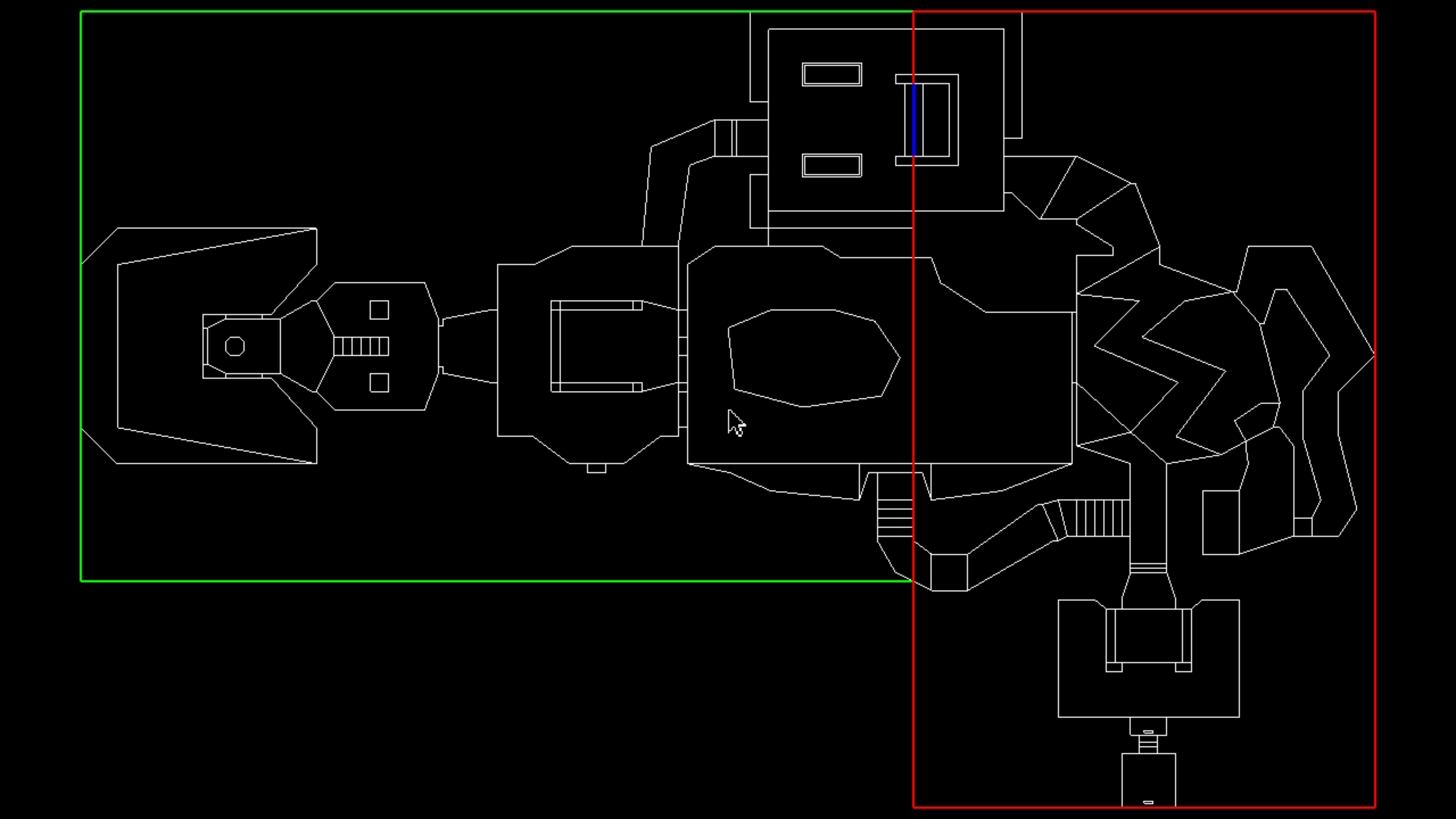 This image shows the Splitter Line for the BSP Tree

Here we can see how we are able to use the BSP tree traversal to detect exactly what SSECTOR and SECTOR a player is within inside of the game.

When the NODEs of the BSP are traversed the line defs are converted into walls facing the player and rendered from front to back with culling to remove already rendered sections. This image shows that process in action where walls are rendered from closest to furthest, culling any walls that are not facing us via traversal of the BSP tree.

Once each wall is determined portions of walls are chopped away in a portal processing section to render windows for those side defs with a transparent section. The remaining walls are rendered line by line to the screen.

This is the Raycasting method of rendering that was common in many games of that era. See Lode's Computer Graphics Tutorial on Raycasting for better details.

At this junction we have completed the core of understanding and loading WAD data in a DOOM game, lets move on to creating a DOOM engine level of our own.